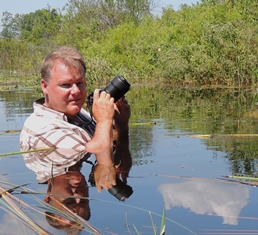 Jim worked for the Ohio Department of Natural Resources for 31 years, much of it as a botanist. He was inaugural president of the Ohio Ornithological Society, and served for seven years as secretary of the Ohio Bird Records Committee. Jim was the 2009 recipient of the Ludlow Griscom award, given annually by the American Birding Association to individuals who have made significant regional contributions to ornithology.

He is author of Birds of Ohio (Lone Pine 2004); The Great Lakes Nature Guide (Lone Pine 2009); and Wild Ohio: The Best of Our Natural Heritage (Kent State University Press 2009). The latter won the 2010 Ohioana Book award. He has also coauthored three other books, including the Ohio Breeding Bird Atlas II (2016).

Jim writes a column, Nature, for the Columbus Dispatch, and a photography column for Bird Watcher’s Digest. He has authored or co-authored over 100 scientific and popular articles in a variety of publications. The League of Ohio Sportsmen gave him the Conservation Communicator of the Year award in 2015.

To learn more about Jim and Ohio Birds and Biodiversity, go to jimmccormac.blogspot.com

Spark bird: the bird that triggered the interest of a human individual to start watching birds. Plants, insects, rocks and sometimes stamps can also create interest sparks in humans.

"Came the first time for the birds, came the next 2 times for the friendships we made at NRBNF and knowing we would have quality time and quality looks at some really special birds in beautiful and unique habitats. We already have it on our calendar for 2017." - Helen & Gary