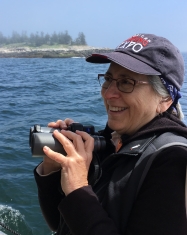 Dawn is a field naturalist for Zeiss Optics, and writes posts for Zeiss Birding social media. She is also a columnist and an advising editor for the new BWD Magazine, and is the former editor of Bird Watcher's Digest and Watching Backyard Birds. She was bitten by the birding bug in 1979 during an ornithology class at West Virginia University. Consequently, many of the first birds on her life list were found in West Virginia. While working as a copy editor and reporter for The Herald-Times newspaper in Bloomington, Indiana, she was also the newspaper’s weekly birding columnist.

She is a past president of Sassafras Audubon Society, in Bloomington, and a founding friend of Friends of Goose Pond, based in Linton, Indiana.

She has been to all 50 states, and birded in most of them!

SOB (s. o. b.) : "Spouse of Birder" otherwise known as a non-birding spouse. We need you. We love you. We may convert you.

"I had a wonderful time and was able to relax, laugh, learn, and connect with great people. NRBNF feels like a family reunion (the good kind, mostly)." - Repeat Visitor