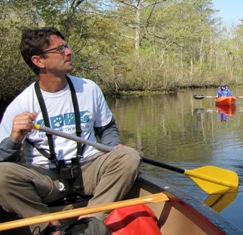 Jim is a naturalist and tireless promoter of nature and heritage travel experiences on the peninsula that comprises the State of Delaware and the Eastern Shores of Maryland and Virginia (known regionally as “Delmarva”). He started birding in 1989 while attending Salisbury University, and became active in Delmarva’s birding community after attending the Eastern Shore of Virginia Birding & Wildlife Festival in 1991.

Jim is the director of the Hazel Outdoor Discovery Center, a 500+ acre wildlife preserve and outdoor recreation hub located in Eden, Maryland. The mission of the HODC is to provide opportunities to explore and celebrate nature, and to promote harmony between all people through natural experiences. Thanks to Mr. Hazel’s generosity and vision, the HODC is made available to scout, school and youth groups at no cost. Learn more at www.HazelOutdoors.org.

Jim was employed as director of the Salisbury Zoological Park from 1994 through 2007. During his service as zoo director, Jim helped develop innovative wildlife education programs, and earned accreditation on three separate occasions from the Association of Zoos & Aquariums. In addition to managing the daily operations for a living collection, buildings, and grounds that hosted 200,000+ annual visitors, Jim also found time to help found and manage the award-winning Delmarva Birding Weekend.

From 2007 through 2011, Jim was employed as director of Delmarva Low-Impact Tourism Experiences (DLITE). Under Jim’s direction, DLITE received tourism awards from the Delaware and Maryland Offices of Tourism for the innovative social media-marketing program Host Our Coast, and from the Delaware Office of Tourism for the Delmarva Birding Weekend. Jim was named Tourism Person of the Year in both Wicomico and Worcester counties in 2004 and 2006 respectively.

Photo from October 2008 with Maryland Governor Martin O’Malley (seated, center) during the signing of legislation designating the Smith Island Cake as the official State Dessert of Maryland.

Jim has served the community as a volunteer leader with several Delmarva-area nonprofit organizations, and has chaired the Board of Directors for the Assateague Coastal Trust, Lower Eastern Shore Heritage Council, Wicomico Environmental Trust, and the Nanticoke Watershed Alliance. He is currently the chair of the Wildlife Diversity Advisory Committee for the Maryland Department of Natural Resources.

Prior to forming Conservation Community Consulting with Dave Wilson, Jim served as a consultant for the Rackliffe House Trust from 2011 through 2016. He also produces monthly travel videos with Unscene Productions for Worcester County Tourism’s Beach and Beyond YouTube channel.

To learn more about Jim and Conservation Community Consulting, go to conservationcommunityconsulting.com

Did you know... NRBNF was the first to go "virtual" due to the pandemic in the spring of 2020? Completely off the cuff and by the seat of our pants, we had an exciting experience, learning and sharing with bird watchers around the world!

"The mountains of West Virginia are a wonderful, magical place, full of wonderful birds. The NRBNF takes full advantage of this with fantastic trip leaders who know where and how to go find them!" - Repeat Visitor