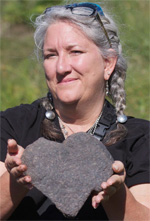 Liz Deluna Gordon has been a birder for 27 years. She got her start in the Lower Rio Grande Valley of Texas where she first discovered Plain Chachalacas, the previously-unknown source of the ear-splitting noises that had awakened her on many a spring morning. After her eyes were opened to the Valleys tropical birdlife there was no stopping her. She decided her goal in life would be to introduce as many people--especially kids--as she could to the idea that birds and bird habitat were worth caring for and protecting. She became a champion of developing the local economy by caring for birds and plant life, and visiting birders. As a member of the team that founded the Rio Grande Valley Birding Festival she has been hugely successful in accomplishing her goal.

Liz met Jeff Gordon while selling Green Jay t-shirts for the Rio Grande Valley Wildlife Corridor Task Force and he was the first person she called once she decided to help organize the RGVBF; 20 years later they married and have been birding together ever since. Now she works by his side at the American Birding Association keeping her goals alive; a passion for birds and their habitats, birding and the birding community drives her every day.

Vagrant: one that has strayed far from normal ecological rang. We are defining bird terms aren't we? Yes. Vagrant birds.